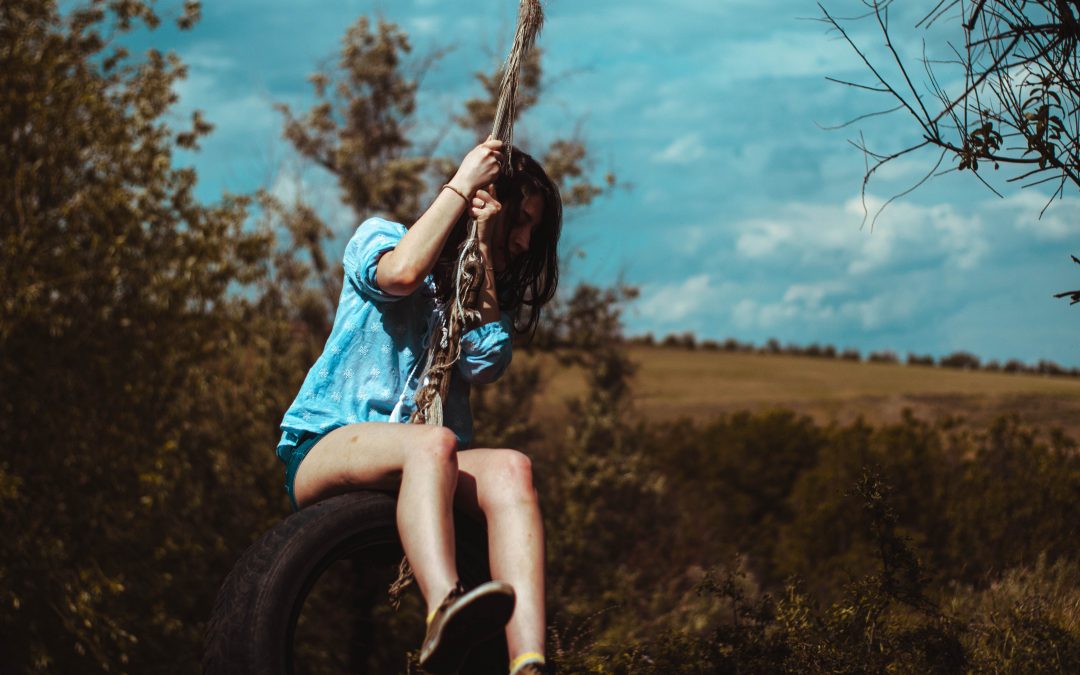 It was an old tire, but while no longer roadworthy, appeared to be sufficient for this trial run. The rope was thick and seemed capable of holding. However, when David sat in and gripped the top of the tire, launching himself out over the stream those two elements in the experiment indeed showed themselves to be up to the task, but the tree branch to which the tire was tethered, alas, was not and just as David reached the middle of the stream, the twig parted company with the trunk and rudely dropped him into the rock-strewn stream bed, knocking him senseless. (an ambulance ride and brief hospital visit confirmed a concussion, ending David’s week at camp. To reassure: he made a full recovery and the parents were very forgiving.)

The mirror has silvered a bit with age but its walnut frame matches the bedroom suite, so it gets hung over the double dresser in the guest room. It weighs a good bit, so heavy-duty hangers are called for – and wisely used, of course. We were jolted from sleep at 2 AM when our trusty drywall, having persevered with its burden for over ten years, finally committed the mirror to the pull of gravity, sending it scrunching down between the wall and the dresser, thundering toward the floor, landing with a sonic boom. Total silence followed. Initial, heart-pounding investigation (think middle of the night, ¾ asleep) kept the source of the explosion a mystery. It was a couple days later that a strange hole in the drywall piqued interest. It was a miracle! The frame held firm and the mirror didn’t break! It has since survived a move and is fastened, securely once again, to a wall in our new guest room. (it should be good, by my calculations, for at least another ten years).

The Mississippi River Bridge, an eight-lane, steel truss arch bridge across the Saint Anthony Falls in Minneapolis, Minnesota, opened in 1967 and was the state’s third busiest bridge, carrying 140,000 vehicles daily. On August 2, 2007, with bumper-to-bumper traffic stacked up across the entire span, it collapsed, sending cars, trucks and even a school bus into the river below. Thirteen people died and 145 more were injured. A series of gusset plates that had held the bridge’s huge steel beams together for forty years were only half as thick as they should have been. They all ultimately failed under the added pressure caused by nearly 300 tons of construction equipment and materials stockpiled on the bridge deck for ongoing repairs. It was a devastating catastrophe for the city, the state, and the nation.

A tree branch. A piece of sheetrock. Steel gusset plates. All strong. All durable. All with their limits, their maximums, their breaking points. These three can’t be faulted for the concussion, the boom or the tragedy. They each followed their design specs and accomplished their original mission. In each case, unfortunately, more was demanded of them than they were capable of providing. I’m sure you’ve already surmised that this note is all about joy. Well, maybe not. And if not, here’s the clarification you’ve been hoping I would get to: Jesus promised to instill in us the fullest measure of joy, his own joy, and made it clear that its infusion would not be like the world’s under-sized, ready-to-fail, often out-of-stock joy but would be perpetually replenished, God-sized, God-strengthed, God-initiated. In other words, no possibility of failure, of partial measures, of our need exceeding his supply. Slight pause here to let the penny drop. We, the super-saturated ones, the spoiled-right ones, the make-a-joyful-noise ones, we intrepid kids of the Kingdom are blessed out of all proportion! Today the invitation is for us to sit a while in our story of Christmas risk-taking, letting our souls be marinated to perfection. PD